Searching For Izena: Unwomanly Stories of Female Leadership At Edmonton City Hall was a 10-part podcast that commemorated the 100th anniversary in 2021 of the first woman (Izena Ross) being elected to Edmonton City Council. Spearheaded by YWCA Edmonton and Parity YEG, it delved into the history of female leadership at Edmonton City Hall, and questioned why only 31 women had ever been elected in the past century. The podcast, which was co-hosted by Stacey Brotzel and Kim-Ann Wilson, featured more than 30 guests, including Senator Paula Simons, former Edmonton Mayor Jan Reimer and Taz Augustine, the first Indigenous woman to run for Edmonton City Council.  In October 2021, Edmontonians elected a record number of women (8) to City Council and the Searching For Izena podcast and year-long project was credited with helping reach this important milestone.

The Searching for Izena: ‘Unwomanly’ Stories of Female Leadership at Edmonton City Hall podcast is co-hosted by Stacey Brotzel and Kim-Ann Wilson.It’s an unflinching, honest and colourful account of the past century and the role women played at Edmonton City Hall and will include interviews and accounts from several of the 13 surviving women councillors and notable Edmontonians … 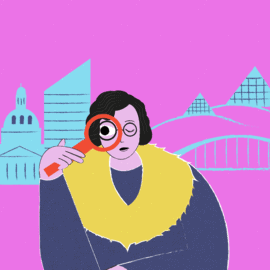