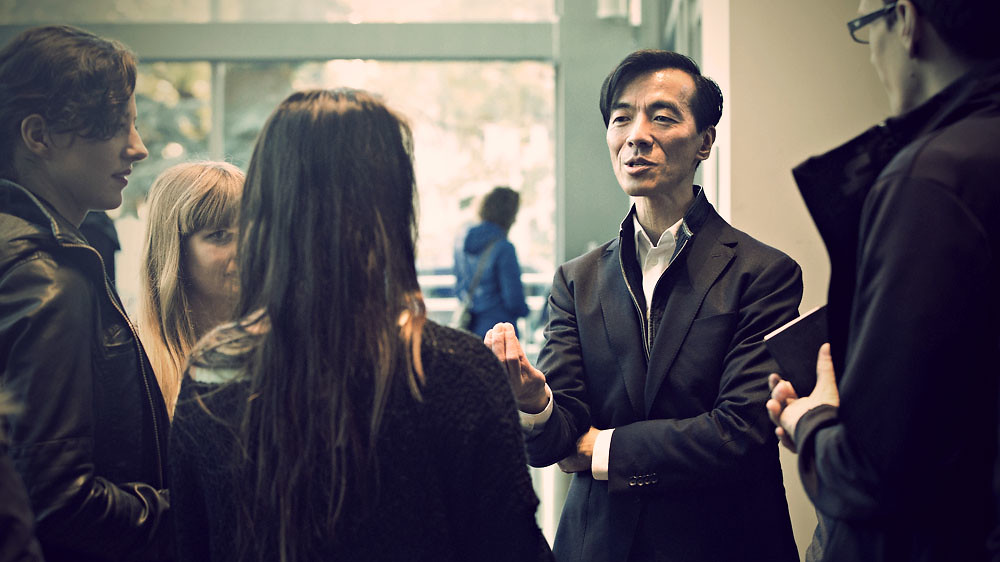 If you asked, he would be the type of guy who would give you the shirt off his back. And it would be a classic and super tasteful shirt no less. He is just like that. Always has been. Always will be.

It just takes a hello from Howard Poon for people to fall in love with him. Those of us who work with him are even luckier because we are in his orbit daily. In addition to being an exceptional designer, Howard is an exceptional person. He has been blessed with both generosity of talent and spirit.

Howard truly sees the success of others as his greatest accomplishment. That extends to creatives, students, our community and our city. He is a colleague, a volunteer, a teacher, a mentor.

Where he truly shines is as a mentor. Howard wants to see others succeed and he takes satisfaction in helping them find their path forward. With words of encouragement and occasionally with brutal honesty.

As evidenced by the support of his Fellowship Award nomination, Howard has a legion of fans. From co-workers to peers to friends to clients to community groups. Many of whom had the pleasure of meeting Howard through his myriad of volunteer endeavours within and outside of the graphic design and advertising community.

“I first met Howard in the late 1990s through the GDC. He was always a steady figure in the design community supporting designers from all backgrounds. He approaches every situation as a learning and teaching moment. I consider Howard a friend and peer that I can reach out to ask a simple design question or large philosophical one,” remarks Sarah Classen, Director, Creative and Digital at City of Edmonton, and GDC colleague.

Brian Webb, Artistic Director of the Brian Webb Dance Company adds: “Howard Poon is an amazing community player, working on volunteer boards and sharing his considerable design and marketing strategies to make our community most vibrant. I have so much respect and admiration for this amazing individual who is always ready to give.”

Long-time friend and colleague Eva Polis, VP Creative Director at DDB Edmonton had this to say:

“Howard doesn’t just ‘make things pretty’. He never has. He takes the time to understand the brief. The challenge. The opportunity. And then he collaborates – always looking for new ways to do things. Over the years, I have seen Howard grow as a creative. His exceptional design skills are almost secondary to what he truly excels at. He thrives on helping aspiring creatives and veterans in the industry – inside and outside of DDB. Howard takes them under his colossal wings and tells them straight up what they need to succeed. And then gives them the confidence to fly.”

Howard graduated from the Design and Visual Communications program at Grant MacEwan in 1985. After a few years honing his design chops in a joint venture with industry veteran Dennis Lenarduzzi, Howard accepted a position with the Edmonton Public School Board. He then joined Palmer Jarvis as a senior designer. After a number of years on the agency side, Howard made the leap to client side at Intuit. But the allure of the agency world proved too strong to resist and Howard rejoined the agency formerly known as Palmer Jarvis – DDB Edmonton. Today, as VP Design Director at DDB, Howard loves nothing more than elevating the brands of clients and providing guidance and mentorship to his team of talented designers.

As he is often fond of saying: “In order to grow, you need to feel uncomfortable.” So it goes without saying that thanks to Howard’s humble, self-effacing disposition this recognition will certainly make him feel all kinds of uncomfortable. But he’ll push through it with grace and humility, as he always does, because pushing for continual growth – in himself and everyone around him – is what Howard Poon is all about.